The Witch is Out of Season Already

on January 11, 2011
Movie Review: Season of the Witch (2011)
Summary: Two knights are commissioned to bring a suspected witch to a city for justice to stop a deadly plague.
Spoilers: none 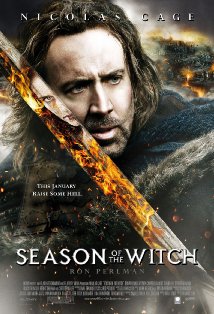 Dominic Sena, director of Whiteout (2009), Swordfish (2001), and Gone in Sixty Seconds (2000) brings us Season of the Witch, starring Nicholas Cage and Ron Perlman as “Behmen” and “Felson,” two decorated knights chosen to deliver a supposed witch (Claire Foy) to a city for trial.

After securing a caught-swindling thief-turned-guide to direct them into the dark territory of vast forests and a deforming plague, bringing to dying ruin entire towns, the journey is made even more difficult by the fact that the crusaders themselves are facing a crisis of conscience with the church's treatment of women and children.

The film opens around the time of the battle of Tripoli (1235 CE) as three suspected witches are brought to trial for making pacts with the devil. Before we see our two men of shiningly simplistic valor redden their swords on the battlefield in the name of God, we see a catechism-holding executioner trying to bring out confessions from the accused girls. An ominous opening to the church's inglorious medieval days introduces us to the force behind our witch, an especially manipulative and crafty one (which is to say, one that is actually real).

According to this movie, the church was right. For every three or four innocent dead girls, murdered by the church in pious and self-assured ignorance, a demonic force emerges in a witch to attack the land of the living to bring curses and death. What are our two knights of honor and valor going to do against black magic? Nothing by themselves, but they can stab the castles full of plague-ravaged priests who fight at Satan's bidding to try and stop them. And as we expected, there is a holy book that can be read to repel these nether-worldly phantoms to go back to hell. Never are the devil's plots so easily foiled as in movies (which is to say, if he really existed, we'd be in a lot of trouble!)

Like everyone else in the film, the abrupt and non-philosophically-inclined attitude shifts of our heroes are flaws that unintentionally credit the film's two stars in their gruff roles. Behmen is the direction-minded, unattached theologian at heart while his ultra-brutish sidekick, Felson, is more concerned with immediate needs, lending a voice that is less idealistic and more pragmatic.

But the characters have only a little depth, and perhaps just a little more likableness outside of the Dungeons & Dragons-type world they come from. There are some harmonious character dynamics here that do work, particularly between Cage and Perlman, but not exclusively. We simply never get to feel them reach out and touch us. The script prevents that.

Season of the Witch is a poor film, and not because the story has no potential. So little care was taken to ensure seamlessness that it's nearly pitiful. Stocks don't close firmly around the hands of those who sit in them. A plague-devoured man and woman lie motionless when the woman reaches out in what is supposed to be a shocking mental notion in Behmen's head, but she moves in plain view of both of them and in two separate scenes that kill the affect.

But the endeavor keeps moving right along, however slowly, threatening to develop character, but never doing so—but instead, just back-peddling to break up the boredom with Halloween hell house-style scare tactics that are not scary. Then it gives us the banter between a trust-eroding group of travelers who find themselves facing demon-energized wolves and mind manipulation brought on, apparently, by the disarmingly manipulative witch.

None of it works because Sena has no idea how to tell a story or how to integrate graduating plot chapters that make us want to watch. The abruptly cut action scenes are an assault on that soft, vulnerable part of our brains that causes us to ask: “What the hell did I just see?” The combat scenes with the swords are a shimmering disappointment. The plague-cursed, attacking monks popping into the action and the subsequent ease by which they are dismembered is next to laughable.

Not much can be said for a movie where the only emotionally moving ordeal is the crossing of a horse-led wagon over an old, dilapidated bridge. But this movie is a little better than Whiteout.