A Second Excuse to Relive the Memories of Your Wild Days

on May 31, 2011
Movie Review: The Hangover II (2011)
Summary: Phil, Stu, Alan, and Doug jet to Thailand for Stu’s wedding where another night of madness begins before the wedding.
Spoilers: none 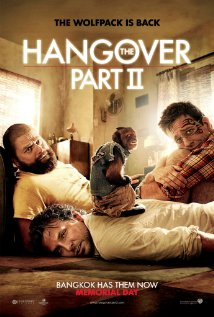 Justin Bartha, Bradley Cooper, Ed Helms, and Zack Galifianakis are back in The Hangover II. Taking place some two years after their Vegas expedition, the four prepare to travel to Thailand for “Stu’s” (Helms) wedding to his new fiancé, “Lauren” (Jamie Chung).

After reluctantly taking along “Alan” (Galifianakis) due to his being responsible for the events of the last movie, when the gang arrives, it isn’t long until things again spiral out of control in a night of riotous, rip-roaring, drunken debauchery.

While Part II doesn’t go in new directions from what we saw in the first film, audiences are given exactly what they want—more crazy, illegal, absent-minded insanity, which is shockingly very well laid out for us by the way the plot explains how it manages to happen again. Surprisingly, the story is believable and well written, neverminding some oddities and subtle changes in the details of certain characters.

There is some initial distance between Alan and his pals. This is the first hurdle the guys must get over before they can band together and make it to Thailand. Once there, Stu finds himself the object of attack from his fiancé’s father who does not approve of their marriage. Lauren’s brother, Teddy (Mason lee), a violin prodigy, is the object of father’s admiration, and so things get no easier when young Teddy tags along for the long night’s ride of partying and turns up nowhere to be found. When things go from messed-up to missing and the pack awakens to discover their situation, it is through an odd set of circumstances that they reunite with international Chinese criminal, “Mr. Chow” (Ken Jeong).

One of the noticeable aforementioned changes is Alan’s weirder-than-normal (for Alan) and nearly creepy behavior, which is played up to maximum levels. But as before, Galifianakis’ role largely makes both Hangover movies what they are, as does Jeong’s hilarious, danger-defying, laugh-in-the-face-of-terror bad guy character that is just too funny not to like.

As most of us expected, things are nastier and raunchier this time around. While at the beginning, we wait longer between laughs, but we get some fabulously funny moments of weird, whacky, and ridiculous. And we would have it no other way! Todd Phillips, the same director who brought us the first Hangover, brings us its sequel, and the substance of the film bears this out. There is even a cameo appearance by Mike Tyson.

In every way short of originality, this second film is better than the first, despite the less than flattering reviews the film has been garnering. Whereas the first film was barely average, this one is hard-hittingly hilarious, less cheesy, and more boundary-pushing in the humor department.

It’s no family movie – not with transvestite nudity, profound amounts of underage drinking, drug use, violence, and verbal vulgarities that rival what you would see at a real-life bachelor party – but we didn’t expect it to be.

There’s no denying that if you liked the first movie, you should love the second, which offers a lot more of what made the first one so memorable. The high-strung, bizarrely agreeable chemistry of our three main stars is a thing anyone can relate to who has ever had a night of mind-escaping fun.