Every Suburbia has its Secrets 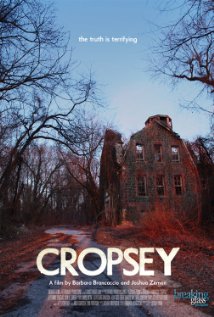 Cropsey is a chilling documentary about an urban legend and its embodiment in an alleged Staten Island serial killer named André Rand who, back in the 1980s, was said to be responsible for the abduction and murder of a number of mentally handicapped children.

As an almost unheard-of drifter on the Island, Rand went by other names and lived in the woods outside of where he worked as an orderly—in the news-making Willowbrook State School for the mentally insane.

If you watched TV in the 1970s, Willowbrook should jog your memory. It was then and there that a young Geraldo Rivera did a stomach-turning expose of Willowbrook in a documentary that drew national attention to the alarming budget cuts that made Willowbrook the hellish place of filth, stench, and neglect that it was to the severely retarded children trapped there.

Now closed down all these years later, along with the Sea View Tuberculosis Ward in the same general area, the story of Rand doesn’t begin as such for us. It begins as a legend that many children growing up in the north were hearing about for years.

Children who grew up in Staten Island and parts of New Jersey and Pennsylvania were told of Cropsey. The legend talked of an escaped mental patient who dwelt under the tunnels of the old, abandoned Willowbrook mental institution.

“Sometimes Cropsey had a hook for a hand. Other times, he wielded a bloody axe, but it didn’t matter. Cropsey was out there, lurking in the shadows, waiting to get us,” explains the film’s directors Joshua Zeman and Barbara Brancaccio. It was the disappearance of one young girl who gave them reason to suspect that the legend wasn’t just legend, but as true to life as they were.

Cropsey begins with an urban legend and creepily moves into an investigation of the disappearance of Jennifer Schweiger, a young girl with Down Syndrome. She was the first of five children to go missing. With eerie music, we see the yellowed, black-and-white newspaper clippings and the old news footage from the time. Some, with searchlights in hand, traversed the tunnels and manholes. Others, with K-9 units and arm-to-arm bands of search parties, searched the remote fields.

We see the same chilling pictures that have haunted local Staten Islanders for years. We are taken deeper and deeper into the legend of Cropsey – past the differing variations of the story and the flaunted tales of satanic cults occupying the area seeking child sacrifices – until it leads us back to Rand. From there, the poorly lit trail takes us inside the family and mind of an even darker soul. But the trail is not only lacking light, it brings up more questions than it answers.

Retired police detectives who worked on the case are interviewed, as is Reverend Charles Muskett, then-pastor for the Church of the God Within who knew Rand. The further in we go to get a background on Rand, the greater the possibility that he could be innocent, so it seems.

Rand was the picture-perfect suspect. He was known to live in the woods near where Jennifer’s remains were later found, but the area had been combed by police and volunteers before with no trace of a body. Rand was a convicted sex offender. Was it public outcry and a conviction in the court of public opinion that robbed him of his freedom?

The investigation moves onto the disappearances of Holly Ann Hughes and Tiahease Jackson. We get follow-ups with Rand’s days in court and an ongoing correspondence between the alleged murderer and the film’s directors.

As we reach the halfway point, it is difficult to determine if we are being led to a startling moment of truth in a soft-handed apologetic for Rand’s innocence. We are instead left to wonder at the conclusion of the long and somewhat tiring list of interviewees that take up much screen time. Some problems with the narrative have us scratching our heads as to what the purpose of the film was.

It is troubling to consider that in a series of cases with a bothersome lack of physical evidence, Rand could be innocent. But at last we find that the purpose of the documentary is not merely to bring us into the know about Rand, or to shed doubt on the veracity of his conviction, but to put us in touch with the power of urban legend and its relationship to history and human affairs. “The power of the urban legend is that it doesn’t claim to be the truth, but rather, that the truth is a range of possibilities. And it’s the audience who must decide.”

What makes Cropsey such a fascinating documentary is its horror movie-style delivery that could rival any gory feature film in your memory in terms of its ability to quickly make lasting impressions on an audience. This effect fades as we get further into the investigation, but the compulsion to watch remains.

Herein is biographical fodder for the couch-clinging crime historian, but with a Halloween horror fit and finish—one of the best and most engaging crime documentaries in a while.