I Was “Surfing” For Emotional Depth

on May 20, 2011
Movie Review: Soul Surfer (2011)
Summary: A teenage surfer girl summons the courage to go back into the ocean after losing an arm in a shark attack.
Spoilers: none 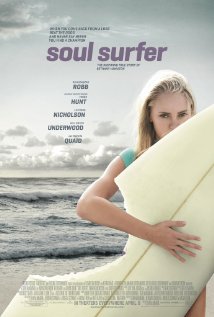 AnnaSophia Robb is “Bethany Hamilton” in Soul Surfer, a movie based on the true story of surfing champion Bethany Hamilton, who, despite losing an arm in a shark attack, went on to make history in the world of competitive surfing.
This well-meaning family film (starring big names like Craig T. Nelson, Dennis Quaid, and Helen Hunt) has all the best of intentions in terms of its direction and scope, which is to encourage viewers (particularly younger ones) struggling with handicaps and setbacks.
The story covers Bethany’s personal struggles from being disabled and the impact this had on her family, friends, and faith. 45 minutes in and we get the first and only attempt to touch on the problem of evil: “I have to believe that something good is going to come out of this,” says Bethany’s counselor and missionary friend, “Sarah” (Carrie Underwood).
Bethany’s struggles are shown for the sake of viewers, including an attempt at trying to cut a tomato with only one hand and failing, and the impact of seeing her old surfboards and a guitar as she enters her room for the first time home from the hospital. But the film never goes where it could have gone emotionally, which is a significant problem.
The difficulties and conflicts of being disabled are never quite played up as they should have been, as the film defaults to its made-for-TV-movie-style summation of events and absolutely refuses to show the dark sides of raw emotion following trauma, like denial, anger, and deep depression. There is simply no on-edge acting that makes us put ourselves in Bethany’s place.
Aside from a realistically gruesome shark attack, the movie feels G-rated, with a church-like emphasis on the hardcore observance of holidays, worship services, and mission trips, giving the film that “Brady Bunch” or “perfect family” feeling that will seem false to many viewers. Ultra-religious families, on the other hand, would consider this perfect viewing material and feel right at home.
Bethany’s training isn’t exactly Rocky on a surfboard, either. Her training isn’t built up enough, and we have the same problem here as with the acting—there are no reeling emotional highs and lows throughout the film, which makes this movie not as inspiring as it was intended to be.
Moreover, instead of showing that the determination to succeed against all odds is in the girl, the determination has to be given to the girl in the form of fans and supportive family in a movie that seems more like an afterschool special about trying hard than it does something you’d go to the theater to see.
What at last becomes a mediocre and emotionally moving tale fell far short of its potential. Two stars for Soul Surfer, determined but underachieving.
(JH)
Grade: C- (2 stars)
Rated: PG (for one traumatic shark attack)
Director: Sean McNamara
Starring: “Bethany Hamilton” (AnnaSophia Robb), “Tom Hamilton” (Dennis Quaid), “Cheri Hamilton” (Helen Hunt), “Sarah Hill” (Carrie Underwood), “Noah Hamilton” (Ross Thomas), “Alana Blanchard” (Lorraine Nicholson), “Holt Blanchard” (Kevin Sorbo), “Keoki” (Cody Gomes), “Malina Birch” (Sonya Balmores), Craig T. Nelson “Dr. Rovinksy”
Genre: Action / Drama / Sport
Trailer
2011 annasophia robb bethany hamilton carrie underwood craig t. nelson dennis quaid helen hunt kevin sorbo movie review soul surfer