on May 20, 2011
Movie Review: Ninjas vs. Vampires (2010)
Summary: Ninjas battle Vampires for the fate of the world.
Spoilers: none 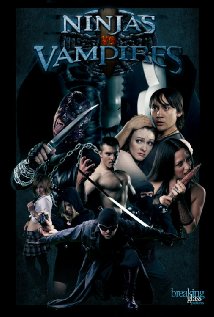 Ninjas vs. Vampires...I can’t add anything to that title. Directed by James Timpane who brought us 2008’s Ninjas vs. Zombies, we are given its successor in the form of this one.

Jay Saunders is “Aaron,” a guy shrugged off by the girl of his dreams, “Alex” (Devon Marie Burt), only to face an odd series of events that put him in touch with a clan of ninjas he is magically initiated into.

After discovering that his world is a dark world on the verge of being taken over by vampires, Aaron’s beloved Alex is kidnapped. The young, nun-chuck-wielding ninja quickly finds himself empowered to fight alongside a good witch, “Ann” (Melissa McConnell), a good vampire, “Lily” (Carla Okouchi), and two martial artists “Cole” (Cory Okouchi) and “Kyle” (Daniel Ross). The director himself plays “Reefer,” a mysterious nerd-type friend of Aaron’s who somehow knows that the city in which they live is cursed. First, it was zombies, and now vampires.

Ninjas vs. Vampires is the kind of comedy-action that falls under the category of somebody’s pet project where the creator is less concerned with whether or not the script accomplishes what it set out to do as opposed to providing vanity entertainment for the creator himself. With this one, the creator is far more concerned with seeing the characters he brought to life impress him in a feedback loop where he gets the satisfaction of laughing at his own jokes and marveling at his own directorial skills, patting himself on the back for carrying the whole project on the burdened shoulders of a low budget.

Timpane knows how to make a movie. That much is evident, not only from his previous work, but from this film. But in this case, characters that are barely into their parts, and who wear sunglasses just for coolness’ sake and speak their lines emphatically with no need, was all that was desired by the man in charge. Nuff said. Job done.

The amulet of power wielded by Ann, our witch lady friend, is nothing but a clear glass pawn from a chess set. The special affects, though passable for a low-budget work, are overused in fight scenes and regularly overstay their welcome--this is in exception to certain training fight scenes between our self-professing ninjas as they spar together on a baseball field. These are not half bad. In fact, they are good.

What is bad is the beginning of the film, starting with the dialog and running into the ludicrous launching of the plot where the audience has not a clue what is happening. We see the film’s star throwing up outside of a comic shop after stalking the owner, at which point, audiences may be heard saying: “And what the hell are we watching this for?”

Things do get better, but not until well into the latter half of the movie when we start to get a feel for the characters and actually like them, when the actors start showing that they feel like the parts they play.

Ninjas vs. Vampires is perhaps a misguided attempt at parody from someone who knew how to make a movie, but was too obsessed with his own vision to see clearly. The film is sometimes funny, and in very clever ways...

The ninja obsession born in the 1980s and the current teen-romance-ridden vampire drek that is making the rounds are both made sport of in a project with some good music choices and an appreciation for fringe humor.

But in the final analysis, this one falls just short of the mark. It’s a wonder how far in audiences will get if they manage to clear the beginning ten minutes. The good stuff isn’t until much later…if you’re even interested.