on May 27, 2011
Movie Review: Priest (2011)
Summary: A priest disobeys church law to track down the vampires who kidnapped his niece.
Spoilers: none 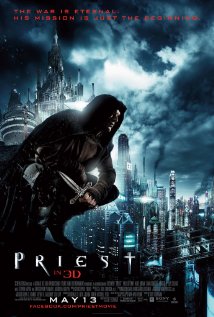 Priest stars Paul Bettany as a vampire-slaying, blade-wielding priest who defies the church’s orders by tracking down his kidnapped niece, “Lucy” (Lily Collins).

Priest is from a graphic novel series with the same title and takes place in an alternate reality where an all-powerful Catholic Church still rules with an iron fist, bestowing blessings and using obsolete, fascistic phrases, like: “Absolution is the only way” and “To go against the church is to go against God.” The latter phrase is repeated far too many times to count.

Priest is intentionally made to be like something right out of the dark ages, with a setting that mixes futuristic technology with a western finish. The writers must have believed audiences really wanted this and 3D affects over character development and appeal, and so they chose flashiness over quality. Big mistake.

Bettany’s character looks and feels like one Jason Statham would play, as being one of a number of ass-kicking priests with ninja-fighting skills who were formerly blessed by the church to kill their undying enemies of the night, the vampires.

Priest may be a vividly created 3D film, but consider it yet another reminder that special affects don’t make a good movie. These vampires are more like harmonious-screaming hell-beasts from a 1990s cult-classic than they are a race of bloodthirsty survivors like the ones we saw in the Blade series or nearly any other comic series in recent memory, and they seem to be intentionally portrayed as wild and unpredictable in a modified type of cowboy vs. Indian scenario. But there’s no point in analyzing any aspect of this film too closely. It doesn’t deserve it.

The Priest character is assisted by “Hicks” (Cam Gigandet), Lucy’s father, and “Priestess” (Maggie Q), another elite fighter, in his battle against the vampires, but these characters never win us over even a little. And yet, we are given far less likable characters in the form of a salesman (Brad Dourif) who tries to con scared townspeople into buying vampire protectant potions. Such silly and unrelatable characters in a movie that starts off and stays this badly mishandled is worse than a flop and nearly an atrocity!

The cross and crucifix-shaped shurikens, the mountains of skulls and bones, the pursuing of “vampire tracks” into caves in order to hunt down a mysteriously powerful vampire leader (Karl Urban) (who, from some angles, resembles a young, evil Clint Eastwood from A FistFul of Dollars, 1964) is simply too much and has no appeal for any audience.

We are supposed to sympathize with the vampire’s plight because sin is fun and vampires are only following their nature in the consumption of blood, which means the church says following one’s nature is wrong. But the support pillars for the plot’s message fall flat with the stereotypically disconnected and corrupted church officials who speak in scriptedly pious sayings that make them not seem real at all. The distinguished Christopher Plummer plays “Monsignor Orelas,” an irrational and bureaucratically-minded church stooge who only adds to this already catastrophically messed-up movie. Even he can’t do a thing for it.

Next to the extravagant affects, the pacing is about the only consistently good quality of the film. The performances aren’t bad for what they’re worth, but no one had the potential to succeed here, not with this material. From the very start, this project was botched way too badly, voiding any chance of it ever seeing the light of success.