on September 07, 2011
Movie Review: Shark Night 3D (2011)
Summary: A weekend at a lake house in the Louisiana Gulf turns into a nightmare for seven vacationers as they are subjected to fresh-water shark attacks.
Spoilers: none 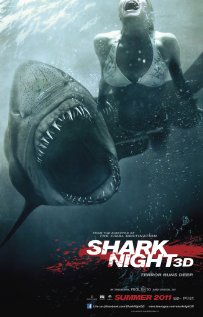 There are at least three things I’d like cheap shark thrillers to quit doing.

1) The Intro Kill: This is where we learn the very bloody lesson that the poor fools in the movie are going to have a shark problem on their hands.

2) The Surprise Boyfriend Charm: This is where, waiting for the initial intro shark kill, we see the girlfriend get grabbed and romantically coddled after an initial scare.

3) Plans for an Insane Party: After the initial gory kill, the stage is set for much more bloody disaster to occur at a huge party on a lake somewhere.

Besides these things, we aren’t asking for too much. We don’t expect another Jaws, but in the spirit of mutual decency, let’s quit trying stupid stuff. No director wants his/her film to be like the Shark Attack series.

I mean, the more intelligent viewers (if they go in at all) are going in knowing that at best, shark movie x will never be what Jaws was. At worst, it won’t be very scary (probably not at all), but more than likely just cornball-ish viewing for late high school to early college aged viewers. Can we please raise the bar just a little?

Well, what can we expect from a movie called Shark Night 3D? Come on, now; it’s called “Shark Night 3D.” It involves college kids who go to celebrate their good grades at the Bayou where they face…sharks. No surprises there.

“Sara” (Sara Paxton) lives on an island and mostly keeps to herself with her dog. This is after a bad experience with a handsome young man she was dating named “Dennis” (Chris Carmack). The two part ways, but Sara finds it in herself to open her house for a weekend party for friends.

“Nick” (Dustin Milligan), “Maya” (Alyssa Diaz), “Malik” (Sinqua Walls), and “Gordon” (Joel David Moore) among others, meet for what promises to be a blast of a good time. This is until super-fast-swimming, predatory fresh-water sharks (among other predator fish) begin taking them apart one by one.

There is a story here, however hard-pressed it may be against observations from reality. Sharks and predatory fish going out of their ways to chase skiers and swimmers over extended distances is exactly the kind of bizarre, desperate-for-thrills crap that the smarter among us have no problem going without.

But there are surprises in the way writers Will Hayes and Jesse Studenberg lay out the movie’s framework. Occasionally, we almost get interested in what goes on. And while it’s common for a movie to kill off its cast going from least to most likable, in this film, the writers have no problem axing even those we’ve come to like, or else not dislike as much. 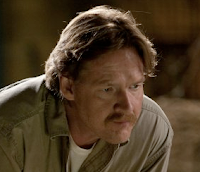 As is found by the ardent “3D for thrills” seekers out there, the film’s affects do not at all benefit from the 3D. The story is a little hard to swallow, and not just because these water predators are so damn determined to kill absolutely everyone—even in extremely shallow waters.

Because they are on an island, the kids can’t call EMS when one of them gets hurt. I’m “on board” with that, but can someone please tell me why cell phones and landlines mysteriously will not work?

It’s for cheap thrill-seekers only. Nothing remarkable here, and not as tolerable as last year’s Pirahna, which at least boasted better star power, with its surprises rooted in humor.