on September 20, 2011
Movie Review: The Debt (2011)
Summary: Three retired Mossad agents struggle with a hidden event in their past that involves the extraction of a former Nazi wartime doctor.
Spoilers: none 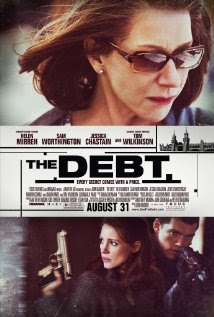 The Debt is an espionage thriller about three Mossad infiltrators who collaborate to bring justice to a Nazi wartime doctor for Holocaust crimes.

The 1966 mission undergone by the young agents, "Rachel Singer" (Jessica Chastain), "Stephen Gold" (Marton Csokas), and "David Peretz" (Sam Worthington), comes at great potential loss. They must identify and extract "Bernhardt Vogel" (Jesper Christensen), avoiding the Russians, while delivering
their target safely into US hands. But when the turn of events is less than favorable and the team finds themselves handling matters in the throws of confusion, doubt, and the feeling of being deserted, a fateful decision is made.

Years later, in 1997 (where the film actually begins), years have passed and our three heroes (played by Helen Mirren, Tom Wilkinson, and Ciarán Hinds) have aged, had families, and had books written about them, having become known for what are considered heroic actions. But the three are holding a deep, dark secret—the events described in the narratives of what happened are not entirely true.

The film is broken up into brief segments from 1997 and 1966 where we are given glimpses of the story told with great focus on the personal lives of the characters. The initially withdrawn and contrastingly on-edge behaviors reflect for us an impulse-prone trio of youngsters who have lots of training but little idea as to what they have gotten themselves into with their mission.

The jarring, suspenseful story at first seems to be set back by the long sequences of dialog in German with no subtitles, but these have a purpose to the plot. The acting, which improves as the film moves forward, may not line the walls of its stars with awards, but will remind us again and again of the moral challenges of living with a lie.

With an impassioned cast and performances strong enough to be memorable -- with a series of big and small twists that further intensify viewing -- The Debt reminds us of what it means to be human and heroic in a meaningful and exciting narrative.