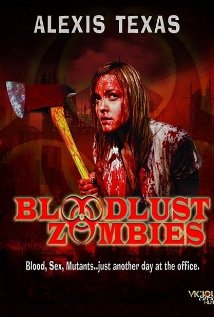 I’m convinced that there may literally never be an end to movies in the zombie apocalypse genre, at least not one I can see coming. Nowhere else is this more true than in the world of direct-to-DVD releases. But while examples of zombie slop are abundant, a bit less so are cheap, poorly produced zombie movies featuring porn stars. Bloodlust Zombies darn near breaks the mould.
Directed by Dan Lantz, our star is “Alexis Texas,” a blonde beauty who has appeared skyclad in hundreds
of adult films. She, among other topless girls, bare their goods for us. Sounds like Lantz figures he’ll grab some extra viewers and get bunches more to be counted among the gore-hounds with Alexis in the picture. He’s not wrong.
Bloodlust Zombies is about a weapons contracting firm called Zlantoff Industries and a team of researchers who create a new chemical called VC-42C that is designed to infect with rage enemy combatants of the United States. The drug is tested on cats and is a success. The go-ahead is then given to engineer the substance to help American troops win in battle. But an accident happens in the lab, which leads to a building lock-down to try and contain the contamination. This is where the movie takes place.

Now things don’t get truly, truly bad until the first few lines of the film are uttered—no, wait, it’s when we consider why the accident happened. The director of the research lab, “Bobby Lee” (Robert Heath) has sort of a loose office conduct policy. Whether or not it applies to everyone else is unknown, but he applies it to himself—he bangs his hot blonde little cowgirl (Texas) over the intercom, bringing grins and laughs as an office-full of dorks and techies sip champagne and giggle.
The film may have nothing going for it in the conventional sense (not counting that it is hilariously bad), but at least the plot component that involves zombies is to be commended. The chaos-causing chemical is intended to make troops of enemy soldiers go berserk on each other. This is something we don’t see in so many movies where zombie gangs choose to work together and chase down the non-infected only.
The performances in this slimy, sleazy, slacker of a super-sucker are as badly conceived as they are acted, with the breast-baring partial exception of Alexis, who, along with “Judy Miller” (Janice Marie), are the only two characters we don’t relish hating. Judy is like a grief-stricken Michele Bachmann and she totes her gun around the office in memory of her fallen husband who died in the army.
To annoy us beyond words is “Darren” (Adam Danoff), the nerdy office jerk whose nasty commentary and mere presence is an obnoxious assault on the sensibilities of the entire world. You have to look pretty hard to find a self-serving, unmotivated, cliché-using sex perv of a comic relief character that sinks this low. Studies show that Jay and Silent Bob and Peewee Herman actually come out way ahead of this guy on likeability tests. 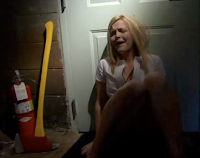 Security guards fretting about their underpaying jobs (Lantz himself plays the office security guard who does most of the yapping), arguing with each other, and telling each other to eat bags of dicks is only a small piece of this excrement pie. So many lines of characters are repeated unnecessarily, and many times with long strings of expletives sandwiched in between. Even junior high kids first discovering profanity couldn’t be any more creative in their mixing up of swears. Many of these are in attempts to sound forceful or intimidating, making it not just sad, but sad and funny.
The script is so sloppy that these laughably standout-ish characters, in their sometimes-somber-sometimes-comical-sometimes-clueless tirades will communicate the drama of terror situations in such a way that any camcorder home movie would offer better performances. People are so easily killed/disarmed/snuck up upon that I don’t think anyone will ever deny that the film fulfills its comedy aspect, and the horror aspect only makes this better—or worse.
The top-up female nudity is an ambitious attempt at trying to raise the bar, but the gore is a stand-alone riot by itself. More than once, these zombies manage to bite necks in a particular place of the victims, causing blood to shoot through the air as if shot out by a power sprayer.
So many zombie flicks have come and gone, but this one is THE ONE to stand out in sheer, unrepentant badness. I laughed so hard I cried, watching for more through the credits. My F might as well be an A+. It’s hard to top this stuff. Even Uwe Boll’s god-awful House of the Dead (2003) doesn’t bat in this league. Troll 2, look out!
(JH)
Grade: F (0 stars)
Rated: No MPAA rating
Director: Dan Lantz
Starring: “Bobby Lee” (Robert Heath), “Judy Miller” (Janice Marie), “Andrea” (Alexis Texas), “Darren” (Adam Danoff), “Office Security Guard” (Dan Lantz)
Genre: Horror / Comedy
Trailer
2011 adam danoff alexis texas bloodlust zombies dan lantz janice marie movie review robert heath