In Contraband, “Chris Farraday” (Mark Wahlberg) is a retired top-level smuggler who has put away playing the dangerous game for a life with a wife (Kate Beckinsale) and two kids. His brother-in-law, “Andy” (Caleb Landry Jones) who used to roll with him in those more fun and
dangerous times, is still living wild on his own.

When Andy puts himself $700,000 in debt by a failed cocaine delivery, Chris is compelled to come to his rescue by getting back into the business to square the debt with temperamental drug-dealing psychopathic ex-con, “Tim Briggs” (played very convincingly by new on-screen big name Giovanni Ribisi).

But even for a pro like Farraday, this smuggling job will prove harder when trying to move foreign currency with the help of recruits in a corrupt circuit of Panama underworld criminals. With the safety of his family threatened, Farraday must look out for his own while delivering the goods in a network full of those who are waiting and ready to catch him.

Contraband is a movie that, by and large, delivers its own goods. We need only dig past some stagnation in the narrative and some minor hang-ups in unraveling plot details to find an intense flick beneath. 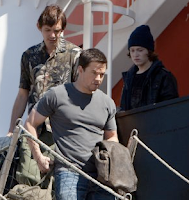 As an action star, Wahlberg has proved once again that he is an understated badass. Audiences generally connect with him, and they do so here. And much like this film’s title, nearly every attempt at winning points with the audience is done through a low-profile telling of a rough tale focusing on skill and street-smarts (and other generally bad-ass motifs, like valor, and the consequences of loyalty vs. disloyalty).

Showcased is a gritty and grimy way to live. Contraband brings that dirtiness right to the surface and mixes it with the desire for a much cleaner life. The result is that we want to watch, although that may not always be as easy as we’d like.

The film is only mildly entertaining. We don’t get too many performances that rise to the occasion of what goes on here, but then, we keep watching because we can’t wait to see what Farraday’s next move will be to outsmart those after him. Then we’ll love the fact that we didn’t think of it and he did. Truth be told, we don’t get to enjoy enough of that.

While starting off strong and then tapering off before finally picking up the pace again as we get near the end, not too many will take issue with the challenges in the movie’s ability to tell a story. The same few who will take more of an issue with the narrative might find the rather straight road to the conclusion somewhat uneventful. The story is so straightforward in its delivery that we would welcome something more in the way of plot-twists and surprises. 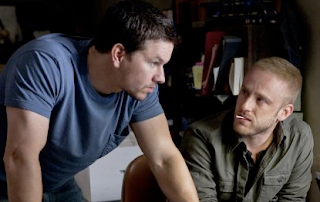 But Contraband is more concerned with telling a story than providing on-the-edge-of-your-seat action. In the interests of building more back-story, we lose some tempo, but it isn’t until we see how things are wrapped up at the conclusion that we can form a definite opinion as to whether or not we truly liked the film.

Apart from the pacing – which is its biggest problem – there really isn’t much reason to not like this film. J.K. Simmons plays a Louisiana ship captain with some real flare, and along with Wahlberg’s appeal and Ribisi’s unnerving energy, we have some stout elements that form the building blocks of a halfway decent movie.