The Devil Inside is as tormented a movie as its demon-possessed subjects are. It assumes the form of (yet another) mockumentary about a woman named “Maria Rossi” (Suzan Crowley) who committed murders at the end of the 1980s during an exorcism and was institutionalized before being inexplicably sent to Rome and held by the Vatican. 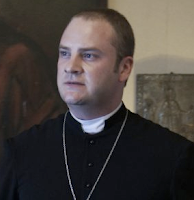 Why are they holding this woman in Rome? That's what her daughter wants to know. An interested “Isabella Rossi” (Fernanda Andrade) sets out to investigate what she has been in the dark about since her early childhood. She travels to Rome and meets two young priests, “Father Ben Rawlings” (Simon Quarterman) and “Father David Keane” (Evan Helmuth).

With the church not agreeing to perform an exorcism or even discuss the Rossi Case, the two priests and Isabella begin to privately investigate matters. Upon doing so, they find that the reality of possession is much less hopeful than churches full of parishioners singing hymns would want to believe.

Even if a demon can be cast out, it's got to go somewhere. Well, where? And is it always a good idea to send an angry demon elsewhere? That is the question behind this entire movie, but the movie never answers it. It just turns a mass religious belief into a cheap dramatic presentation designed to shock us with a look at the dark side. I'm less than shocked, however.

The story does not resist development. One has no problem getting through it, wondering where the time went. The performances we get enough conviction out of to stay with throughout this fairly short mock-chronicling where our three leads occasionally stop and face the camera to more fully elaborate on how they feel (as if we cared).

This would be fine except for the fact that we never feel compelled to consider it justified why they bring the camera along when things start to go possession-crazy. Fact: when everyone just loses their shit, they aren't thinking about packing around a camera! 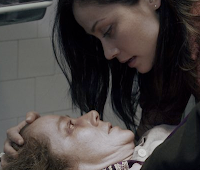 I said it and it was so easy. And yet, amazingly, no one who makes mockumentaries ever thinks of these things!

And things do really go possession-crazy. The problem is, there is just little else to be explored in exorcism films beyond what we've come to expect: convulsions, very painful-looking body contortions (these were well done), mysterious body-markings of religious significance, the knowing of unknowns by indwelling demons, and unnatural strength—all of which are brought in here, but the film is never scary but for a few blusterous moments of startling realism that combine dialog with some body language that actually – hold the applause – work.

Even when what we're watching manages to ring credible, the whole project never feels convincing or compelling. The film itself is possessed of badness. Its attempt at hiding behind a crudely low budget in a false documentary style is, in this case, blatantly disdainful. We get nothing from it. Well, almost nothing.

Father Rawlings is a little bit arrogant for a priest. Father Keane is worried obsessively about being ex-communicated from the church over conducting an unauthorized exorcism. That is all we get by way of conflict outside of the three's exorcism, which feebly tries to pass as a sort of subplot, but we never find ourselves giving a care.

Since the story focuses on the unwillingness of the church to explore the Maria Rossi Case, you would expect there to be some drama between the two young priests and church officials in the refusal of the hierarchy to see what our main characters see, but the film misses any opportunity to exploit this.

And the film isn't even consistent with itself. A demon-charged Maria has the strength to kill people. She can sling priests up against walls like a creature in some sci-fi movie, but it isn't that hard for two men to restrain her and carry her back to a table and continue an out-of-control exorcism until doctors burst in. I'm not buying.