“You don’t belong in this life,” a hardened criminal tells “Baby” (Ansel “The Fault in Our Stars” Elgort). They call him Baby because he is by far the youngest to participate in organized crime they have ever seen. And without a doubt, he is the youngest ever to serve as a getaway driver for a mobster.

Now Baby has had a tough childhood. He lost his parents tragically at around 8-years-old, and the trauma still manifests as a continual ringing in his ears (tinnitus). He tries to drown it out by always listening to music. He has tracks for every mood and task, but he also spends his spare time making music remixes out of random snippets of recordings he comes across. Like a modern Portland hipster, Baby doesn’t go mainstream, but prefers vinyl records and push-button, wall-mounted phones. The hipster element in this film is so strong that, taken alone, many scenes would make the film look about 20 years older than they are.

Baby’s state-appointed guardian (CJ Jones) he now takes care of due to age and bad health. They were and are close, but since Baby got mixed up in the mob, things have changed. And now, Baby has to use his gift to survive. Baby’s gift is the gift of rhythm. Ever since the accident, he’s learned to pace his life around music. Put him behind the wheel of a car and you’ll see his savant-ish skills come out like nobody’s business. Here, the chase sequences alone will dwarf those of many a car-porn junkie’s favorite movies.

Baby can take care of himself…but then comes “Debora” (Lily “Cinderella” James). She’s just a waitress, but what they both have in common is the stuff of storybook dreams. They both share the desire to just take off and do what they want. They don’t plan; they don’t think ahead; they just live in the moment. It’s the sort of stuff every 40+’er has learned to steer away from as they climb in age. 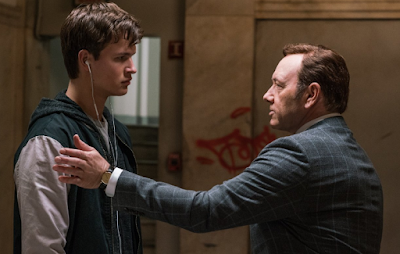 When the film begins, the now that Baby lives in belongs to “Doc” (Kevin Spacey), but as stated in the opening, Baby doesn’t fit in. Doc’s crew consists of dark souls. They carry an aura of filthy heaviness everywhere they go. They look out for #1 and no one else. One of the brilliant aspects of Baby Driver is that it brings into play people’s duplicitous natures; at first, Doc implies he is going to let Baby off the hook when he has paid back his debt, but he reneges on that; Doc said he never reuses a team to do a job, but in the end, he is doing just that. There is no honor among thieves…or killers, and certainly no honor among thieves who happen to also be killers.

This recycled team consists of “Darling” (Eiza “From Dusk Till Dawn” González) and “Buddy” (Jon “Mad Men” Hamm), and “Bats” (Jamie Foxx). Foxx’s Bats is a particularly ignorant and demented ingrate whom the audience cannot 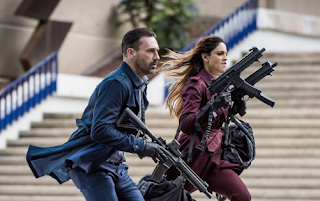 help but loathe and feel sorry for the more he opens his mouth. His is the most vivid performance in the film. His eyes say everything through the screen. We don’t buy into Darling and Buddy. They feel like supporting characters from a Fast & Furious flick. And we are not as sold on Spacey’s Doc. He’s too black-and-white here, too one-dimensional, as he tries too hard to be over-the-top. But he’s Kevin Spacey so he can just phone it in and it will be snatched right up by filmmakers. Now Spacey usually plays a real good villain, but the problem here is, we like him too much and so his villain is a no-sell.

Director / writer Edgar Wright (Shaun of the Dead, 2004) brings us this story from his own noodle and there is not much out there like it. As a protagonist, Baby is such an introvert that we doubt our own liking of him. We keep waiting for the other shoe to drop to account for his sense of blankness that makes everyone in the audience – and in the film – wonder what is driving him onward. But he’s young and makes bad decisions and doesn’t know himself yet. And the script's adoption of Baby is off-putting since we don’t know which direction Wright should have the character go. Every other performance in the film is so high-octane, so direction-oriented, but it is never altogether clear where Baby is going because he doesn’t express himself openly. The film brings this out in the impulse decisions that he is forced to make but that he isn’t always okay with. 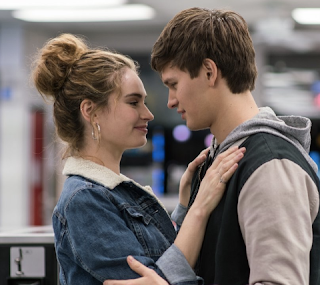 The beauty here is that our bad decisions make us who we are. And this is what personal growth is about. There is always room for redemption. Only when you’re dead is the opportunity gone. The big decider is, are you one of those who can spot the need for it in yourself?