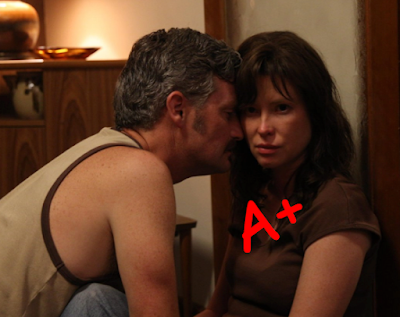 “Vicki” (Ashleigh Cummings) is a teenager and she wants to hang out with her friends. But she has been told she can’t go to a party by her mother. She sneaks out anyway. In the course of making her way to the party, she runs across “John and Evelyn White” (Steven Curry, Emma Booth). They lure her to their home, drug her, and chain her up. They proceed to sexually abuse her. And Vicki isn’t the first they’ve done this to.

But as the two take complete advantage of Vicki, Vicki takes advantage of them. It becomes clear early on that neither John, nor Evelyn are mentally stable. As Vicki endures maddening sexual abuse and psychological victimization, she has to keep her wits about her to live another day if she is to escape.

Director Ben Young (Something Fishy, 2010) brings us in Hounds of Love a truly dark and harrowing tale from Perth, Australia. And although not directly based on any particular serial killer or killers, it borrows heavily from the 1986 killings of David and Catherine Birnie who tortured and murdered at least four girls. Being from Australia and a big fan of crime lore since childhood, Young had this film brewing inside of him since his early days. His fascination with serial killers comes out in this, his contribution to the genre. And a fine contribution it is! 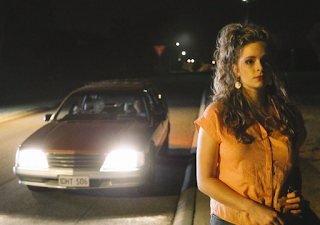 The film builds character while it stretches the limits of our expectations in an hour and 48 minutes, and on a small budget. Most of the film takes place in a few rooms of a house, but everything we do get to see is remarkably well selected and served up for us. As a thriller, most just won’t be able to handle it. Not even close. In terms of its value as a film, it teases us and holds us in ice-cold suspense as we watch with baited breath for an outcome that we hope doesn’t leave us sinking in a greater depression than it already has us in at just before the halfway mark.

Young’s project breaks some rules, as well as viewer expectations. It takes some risks, but they pay off by Young keeping tabs on characters to ensure that they don’t do something out of character when we want them to the most. Since it wasn’t exactly “based on true events,” it can take some liberties while still sending away viewers believing it was biographical in nature. 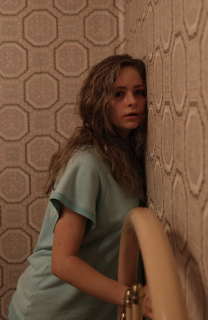 Ashleigh Cummings comes to us from Tomorrow, When the War Began (2010). And with only a few short films and small parts under her belt, she gives a high-tier performance. Cummings’ Vicki is a typical kid. She wants to have fun and all adults are irrelevant. We feel her through and through.

And with the two psychos, we are even more in awe; we watch and feel the cerebral hell that John and Evelyn have made for themselves in the lives they’ve chosen together. Curry (The Castle, 1997) does a spectacular job playing a sadist, a husband with an anger problem, but he is outdone by Booth (Gods of Egypt, 2016) whose on-edge breakdowns are equally – if not more – stunning to see. We can feel her explosions like we’re standing in front of her. We see it over and over again, as she lashes out at complete strangers and neighbors alike in those frequently occurring moments when she’s starting to feel unloved again. Of course, no one can love her enough because she doesn’t love herself.

The only real “sad” part about Hounds of Love (perhaps other than its questionably chosen title) is that the subject matter is simply too dark – as are the depths to which it goes to explore it – for the majority of audience members. But I say, more power to it. It is one of the best films of the year by far!