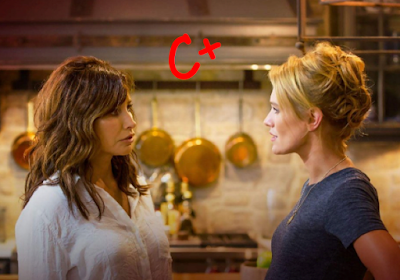 Amidst its hurried pacing, semi-hollow characters, and too-well-behaved kids, what is conceivable about Inconceivable is that it has a crazy for a lead. And movies about crazies are always fascinating. It’s an unwritten law of life. A movie can suck and yet be watchable if only it features a batshit-nuts primary character. Say it ain’t so.

“Brian” (Cage) is a middle-aged doctor, as is his wife, “Angela” (Gina Gershon -- P.S. I Love You, 2007). Both look and feel like real people you might see in your own neighborhood. They both love the lives they’ve made for themselves, but something is missing. As Angela struggles to bring a child to term, through her friend “Linda” (Natalie Eva Marie -- Total Divas, 2013-2017), Angela makes friends with “Katie” (Nicky Whelan -- Hall Pass, 2011, Neighbors, 1985). Katie is a looker—suave, smooth, talented, and yet shrouded in mystery. And she can cook! Brian’s mother (Faye Dunaway) has some misgivings about her from the get-go, but manipulators have a way of growing on those who at first have an eye to spot them and call them out.

As the relationship between Brian and Angela and Katie begins to build, the two strike a deal with her: Live in the guest house, be a nanny, and carry our child! You've got to know someone really well to get anywhere close to allowing any of that to happen. Things start out normal, but as the relationships degrade and we watch things fall apart, we see in Katie the sort of far-end narcissism that makes things audaciously juicy.

Now the actors here were not the problem, but the direction was. Newbie director Jonathan Baker rushes much of the needed character development early on, expecting us to jump right into the moods, feelings, and convictions that he wants us to take away from what transpires. And a lot is wrong here; although Katie is obsessed with finding herself in motherhood, the kids are the most silent and trouble-free you’ve seen in any movie in this age range (the kids only speak if and when directed to off camera, and it’s way too obvious). Watching how people think children behave (as portrayed in movies) can be as insightful into a director’s mind as a movie itself.

Scenes and exchanges break off too cleanly, dialog often feels forced and unnatural, and the big names we get here are underutilized in their roles. And this is as restrained and as mute as you will ever see Nicholas Cage! Swift character changes do not match what you would see in true-to-life encounters. And Angela’s psych profile is not quite that of an addict. She’s too giving, too level, too self-aware. She's not selfish enough to be an addict. But as things progress, we don't really care about those shortcomings because Katie is deep enough as a nut job to hold our interest. That is, she's smart, conniving, and predatory by nature. She can't even consider that she could be wrong. Her identity is wrapped up in her offspring. She is trapped in the prison of her own twisted perception of motherhood. And what she gives us we can appreciate.

As the plot elements keep getting introduced in brief flashbacks, the crazy starts coming out and is augmented in layers. That is where our fascination lies…even if it makes us go “huh?” from time to time.

There are a few quick moments in which we see plot pivots that get us excited, such as where Angela is spotted by Katie handling pills, and Katie disdainfully looks on. The gradual erosion of everyone's confidence in Angela is also impressive. As it trucks along, the film starts to score points by NOT taking cliché-bait towards the end, and by misdirecting us a time or two. The ending is way too drawn out, but by now, we aren’t asking for gold, just copper or maybe even bronze.