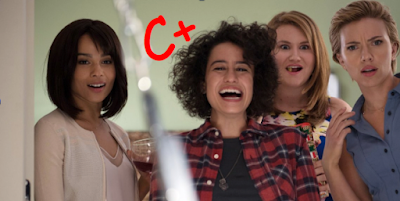 Rough Night is the sort of rom-com that goes in and comes out without making a mark (or leaving one). It doesn’t lift our spirits, challenge our preconceptions, or make us believe in love. It does make us laugh a little, though. It stars "Jess" (Scarlett Johansson), a runner-up in an election and a textbook-case workaholic. Her besties include a well-diversified group of gals who are as different and potentially antagonistic toward each other as you get. "Alice" (Jillian "22 Jump Street" Bell) is the token "thick but still cute" best friend. "Blair", "Frankie", "Kate", and "Lisa" (Zoë Kravitz, Illiana Glazer, Kate McKinnon, and Lisa Grey, respectively) are sharply constructed, which means it is never a reach to imagine them behaving just like we see they do between themselves on screen.

Ten years out of college and they are deciding it’s time to celebrate Jess' getting married. The plans are made easily enough, but some issues need to be resolved first—or last, in the sort of way people do when they make a lot of noise and do things like party to deny how they really feel about each other. But more dysfunctional fun for us in the meantime.

The bachelorette party ends up being standard fare stuff (alcohol, cocaine, phallic objects, and male strippers). When an accident with a stripper results in the loss of his life, the gaggle of girls goes crazy in a way you can completely see coming. This affects her soon-to-be-husband "Peter" (Paul W. Downs) who ends up running around in diapers from the sheer impact of the feelings of insecurity brought on by the insane sequence of events. Granted, nobody acts like this, but we can all relate to how utterly messed with we feel when a romantic interest we have has us doing things we normally wouldn't do. But make no mistake--Downs gives the single best performance in this film!

Director Lucia Aniello, known for giving us the TV series Broad City, has the storytelling skills that are just tight enough and the narrative direct enough to pull this one off. Throwing in some sex perverts as neighbors on the beach was only one more reason to gawk at why everyone in Rough Night is a moderate exaggeration of someone you know in real life. It’s actually endearing, if for sure ridiculous. And thankfully, the script remains smart enough to keep us from overtly disliking it.