The standard for creating a superhero movie has now gone up — way, way up — so much so that all films coming after Avengers: Infinity War will have an impossibly high bar to measure to. The film should have been named “Avengers: Infinity Everything” because it gaspingly overreaches in literally every aspect of what it hopes to accomplish. It’s as if the production team came together and really convinced themselves that their film could, in fact, accomplish…infinity.

Now we aren’t given a graceful “what everybody’s been up to” reintroduction to kick things off, no sir, no ma’am; we open with a fight. And you know when you see the Hulk getting his rear-end handed to him that you don’t want to miss anything that comes after that!

Some years have passed and the Avengers have gone their separate ways. The US Government isn’t much happier with them, even considering this crazy, world-ending crisis (strangely enough). But now, they are called together again. They must join forces with the Guardians of the Galaxy crew to try and stop Thanos (Josh Brolin), an Intergalactic Warlord of ridiculous proportion. 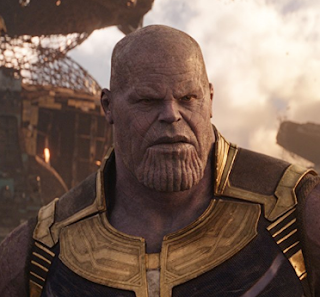 Thanos’ logic is never sufficiently explained to the audience, at least not on a moral level. He’s just a despot, the kind children learn they are supposed to loathe in storybooks, the type who must remain un-relatable because no backstory can be given to allow them to seem grounded in reality. The Thanos we come to know on screen has much charisma, but is so fever-pitch in his intensity that the smarter audience members tend to suspect that if Thanos actually gets what he wants (ending half of all life in the universe), he’d be unhappy with it. What is sufficiently explained is Thanos’ weapon, the Infinity Gauntlet and how, when it acquires all of its stones that make up the fabric of the universe, a mere snap of the fingers can vanquish any and all life. That Tesseract from the earlier movies plays into this, too, don’t worry.

By way of footnote: I’ve always found it strange that, for some reason, no one entity or force in the universe can manage to keep these precious, all-powerful stones together in one place, but never mind that. But you know the stakes are higher than in every other superhero movie that came before, and that becomes the problem—with a grand threat must come a grand countermeasure, and that involves a lot of superpowers…and therefore, superheroes. Starting to see the problem? Good.

The movie spends so much time weaving together the wonkily strewn out plot-points that it becomes borderline cruel. We know going in that excessive humor will be relied upon since it is the only way to soften the blow of getting us caught up. And this is where things stretch comprehension limits, as the plots from countless older superhero movies have to be tied in. The problem: it takes over 2/3s of the way in of a 150-minute movie to get done with it all.

Hammy pop culture references and schticky one-liners take up almost every single segment of dialogue. After a while, we find ourselves getting in the mood to make our own gaffs right along with the cast members since, well, why not?

Another thing that has gone too far: Taking gross liberties with the laws of physics. This is my beating a dead horse, but the expectations of humanoids being able to fly through space and land on the front of spaceships after their planet is destroyed and living to tell about it...I can't go that far. And if you can channel the energy from a neutron star in your body and be okay afterwards, you deserve to rule the cosmos in my book! But the downside of that is, I can’t relate to you as a character anymore, either. And when every other combat sequence has a human body flying into a building at close to the speed of sound and getting up to fight again, it becomes exponentially harder to care about anyone at all.

The aforementioned physics exaggerations are exceeded only by the heavily-laden CGI that has to justify so many battles and techno-layouts that things feel eerily reminiscent of a Michael Bay movie. Massive amounts of property damage and pulverizing of landscapes are going on at one time. Equalling shocking: How despot warlords and their armies can travel hundreds of lightyears, break into earth’s orbit, and start a war in what has to be just a few minutes. If you can go from a neutron star to earth in a single lifetime, you are truly blessed!

With all of the dazzling visual stimulation, we still can’t help but become numb to all the character appearances made invariably right at the last second before someone is about to be killed. We get little time to appreciate the quality of performances, with some exceptions; namely, Brolin who captures our hearts and appeals to each and every viewer. The disconnect between character appeal and motive is still hard to ignore.

Paul Bettany (as “Vision”) and Benedict Cumberbatch (as “Dr. Strange”) command expectedly engrafting performances, even with their considerable downplay here. But what was done with Banner’s Hulk I will not soon forgive! Speaking of Hulk, Ruffalo (and Johansson, and other talent, including Holland and Boseman) sing an almost sad song of “I wish I had more time to sell myself.” These are among the “elephants in the room” in our minds throughout this flick. And those elephants stick around until the final fight.

As if I hadn’t said it before, just too much is happening here. Had we had about ten fewer characters to digest, this review you are reading would be considerably different.

It is normal to want to see flushed out a plot THIS thick and full of references going back to the beginning of Marvel comics. But if it can’t be done properly, it’s a no-go. And in this case, it doesn’t serve audiences well because it is too indulgent of a plot. Those guys on YouTube who inject oil into their muscles because they just can’t be big enough to ever satisfy their lust for size? This is the superhero movie equivalent of those guys.

The Russo brothers have brought us a movie that is, quite actually, more of an exploitation than a movie. The range of emotions in this film is undefined and undefinable as it jerks us from one extreme to the other. Props, though, to any production that will run headlong into a finale that goes right against the grain of all watching it. There is a certain sense of rare satisfaction in a film like this that, despite everything else about it that is vying for attention, garners an incredible level of respect, a kind of “street cred” by violating our long-held expectations. Infinity Wars, of course, will be followed by a sequel that is already set for May of 2019. As stated, the bar has been set quite high. And now, the only place to go from here is down. Consider it a karmic thing.