Clint Eastwood’s The Mule tries to bring us a semi-redemptive story about the ravaging wisdom of age from a life filled with regret. The results: Well, being generous, they are mixed.

"Earl Stone" (Eastwood) was a great horticulturalist in 2005. He had a green thumb. Then came the internet. Fast forward to 2017 and he’s not only missing out on his daughter and granddaughter’s wedding and special occasions like he’s done all his working life, but he’s dead broke and losing his house. Earl's estranged wife, "Mary" (Dianne Wiest) is past the days of trying to stand by his side. He just hasn't been there, and everyone is plain tired of it. In dire straits, an acquaintance refers Earl to some shady characters. Thus begins his life as a mule for the local drug cartel.

After the first run, the money starts coming in, but it isn't long until the trouble follows. Over a series of drug runs, the feds get involved. A hungry-to-prove-himself drug enforcement agent "Colin Bates" (Bradley Cooper), who has just moved to the Midwest and wants to please his boss, is hot on his trail. With the help of talent like Laurence Fishburne and Michael Peña, I'll go so far as to say that things start off better than they end. 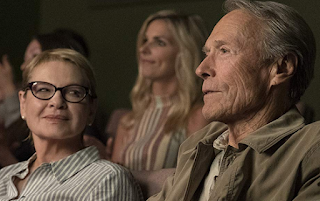 The movie comes to us from a New York Times article, "The Sinaloa Cartel's 90-Year Old Drug Mule," by Nick Schenk. The film isn't intended to be a true account of the story, but is an "inspired by true events" take on the true story of Leo Sharp, a World War II Veteran who, in his late 80s, became a drug dealer for the Cartel who achieved notariety.

The Mule really isn't a bad movie; it is, however, challenged in serious ways; the first issue being the character of Earl himself, and the second the tonal confusion throughout the plot. The movie spends a great deal of time showing us the checkered life of Stone and his sensitivities. But then it tries to develop his tough-to-be-intimidated side, which doesn't entirely agree with the former. Would that they would have pulled it over in the direction of an "old folks" dram-com, it would have done well.

It's refreshing to see Stone doing his own thing, even when employed by organized crime henchmen. He starts to make inroads into the lives of some very bad men…and that’s where the plot just leaves things…undeveloped by the film’s end. It wholly writes out one main character. And not only does the plot miss opportunities with character development and important story elements, it doesn’t serve as the “feel good experience” that the writing leads viewers to believe that it will be, either. The end result is a let-down for a movie. That's not something we've come to expect from Eastwood. 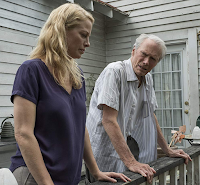 Eastwood is, of course, expectedly likable, but so are the bad guys we are supposed to buy as seriously evil people, but we don't (more tonal confusion here, and some one-dimensionality of the supporting characters). The Mule doesn’t know what it wants to do, much like our adorable lead character whom we’ve become so fond of watching over the years. This is unfortunate since the film had a few fine performances, including that of Eastwood's real-life daughter, Alison Eastwood who plays his movie daughter, "Iris." The aftermath--we lost an opportunity to have a truly memorable movie.